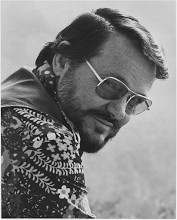 William Rotsler, author, artist, sculptor, photographer, and cartoonist extraordinaire, died suddenly October 18, 1997, at the home of his friend, Paul Turner. He recently had throat cancer surgery. In the last few years, he had a heart attack and bypass surgery, and various other severe illnesses.

Rotsler's cartoons and drawings delighted and amazed friends and fans for 50 years. In 1996, he was given Hugo and Retro-Hugo awards for work 50 years apart. He won his fifth Best Fan Artist Hugo Award just this year. His spare, laconic drawing style masked an ability to look at life, described by Harry Warner in A Wealth of Fable, as "funny on the surface, terrifying a millimeter beneath to anyone whose eye could penetrate."

William Rotsler was born 3 July 1926 in Los Angeles, California. He worked on a ranch in Camarillo as a teenager, and served in the U.S. Army from 1944 to 1945, learning the profession of photographer. He discovered fandom in the mid-'40s and was part of the Los Angeles fan scene for over 50 years. He attended Los Angeles County Art Institute, 1947-50, and worked as a sculptor of mainly outdoor modern work from 1950 to 1959, then gave it up to become a photographer, filmmaker, producer, director of commercials, documentaries, etc. He worked mainly in the "erotic" industries, selling photos to Playboy, writing columns for Knight and other men's magazines, writing, directing, or acting(!) -- or some combination of these -- in such movies as The Agony of Love (1966), Notorious Daughter of Fanny Hill (1966), Shannon's Women (1969), and The Secret Sex Life of Romeo and Juliet (1970). He frequently used fan friends as extras in his movies. This part of his career mostly ended by the '70s. During all this, his prodigious output of cartoons and drawings continued unabated. He was fan Guest of Honor at the World SF Convention in 1973.

(posted 21 Oct; excerpted from the obituary to appear in Locus Magazine, November 1997)

Read 5 Time Hugo Winner William Rotsler's Patron Of The Arts ($2.99 - Free on Amazon Unlimited) and The Far Frontier ($2.99)
No comments: